Just thought i'd post to wish everyone a happy first week of summer,well-what people count as summer anyway. We're not doing very much here but later today we'll probably eat dinner outside with the dogs for a little something different.

My visit with my online friend last month went really well,he acts the same as he does online so there wasn't any awkwardness or anything like that. ^^  We went to see Rio 2 and eat at Subway,then the rest of the weekend was spent just doing various things. We went to the battlefield around here (it's also a national park kind of?) to walk around for awhile and found these feathers while we were there: 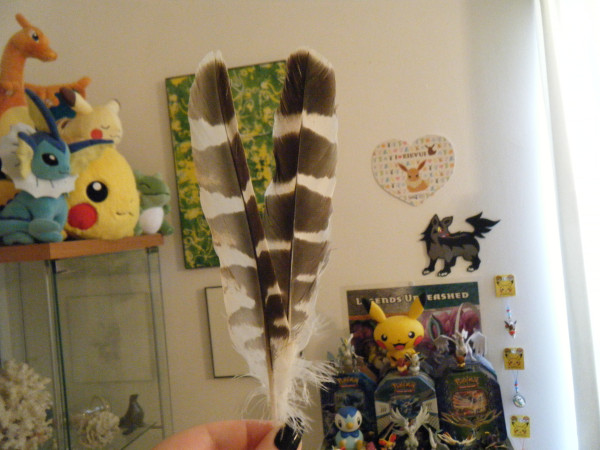 Apparently they are Barred Owl feathers! I kept two and he kept two,a nice memento of the visit I suppose. :3

It would be nice to be able to see Brian too but we both are unemployed atm so it's just not really possible. Atleast I can talk to him online if nothing else. His birthday was yesterday but I couldn't really do much of anything for him unfortunately, I just left him a message telling him happy  b-day/I love you.

As far as financial and family situations go,everything is about the same. Collecting wise I have only been getting a very small amount of Pokemon stuff lately since it's rather pricey. I did place an order for the Sylveon Pokedoll though. <3 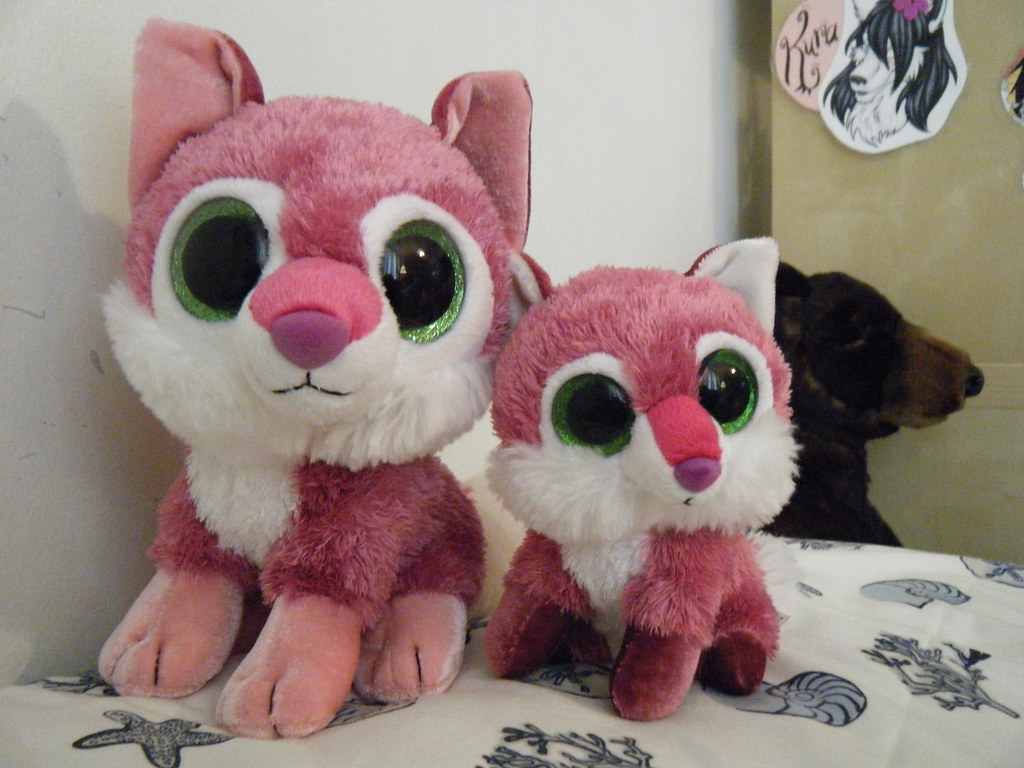 Aren't they cute? They are supposedly different brands but I think they just have different tags and are made by the same company,lol.

But yeah,that's about all I have to say for today. One thing I always hate about summer is my room gets way hotter than the rest of the house because this room has two large windows. It sucks because it's really noticeable, Cody doesn't seem to mind very much atleast. I guess Sun Conures are rather tropical in their native land? He follows me around and his cage is in my room, so it is easiest to get pictures of him (when he isn't moving too much to get a clear pic,grr.) I just have these two of cookie laying on the patio right now, I should try to take more pics of her and mimi later so its not just a post full of cody pictures next time I show photos of them. Got a couple of mimi, she always has that dopey/happy expression for some reason. XD

I didn't get anything of Piper (Mom's cockatiel) lately...I'll try to do that next time. I've been kind of wishing it was fall lately for some reason, I tend to do that almost every summer anymore though. I am about half way done with the summer school stuff, by August I'll be completely free of that sort of thing.

Today Cody decided to sit on one of my custom Kura  plushies and didn't want to leave,which would be fine as long as he doesn't do something beyond just sitting there. Luckily,that was all he did. In other news, yesterday I got these at the dollar section of target:

MLP:FIM Magnets!
I am giving two to one of my online friends (pinky pie +rarity) and I don't know if I should just buy a second sheet and give them all out or if I should just keep the two I really want to keep (rainbowdash and applejack + their cutie marks) and give the rest out, so what do you guys think? Would any of you like one?

Last night,something kind of scary happened. I trimmed cody's claws/nails and one of them got cut to the quick, this isn't just painful as it is but the bleeding it causes can be quite harmful to birds. I had one of those pen-type things meant for stopping this kind of bleeding but I was still worried about him for awhile: He wasn't putting weight on that foot a lot,and yes that is a trail of blood on his perch. ;_;

But then I checked on him this morning and he was all better! Here is a picture I took of him today (its hard to get pics of him sometimes because he likes to move around): I also took a video of him,please ignore the "Ow" at the end, he bit the camera and my finger since I was holding said camera. -.-
http://www.youtube.com/watch?v=qBUgW2QMMwU
Collapse