Figured now would be a good time to do this. Although I didn't exchange with anyone who had been on my friend's list previously, I still had a pretty good turn out. I also met some new people on here and on DeviantArt. :3 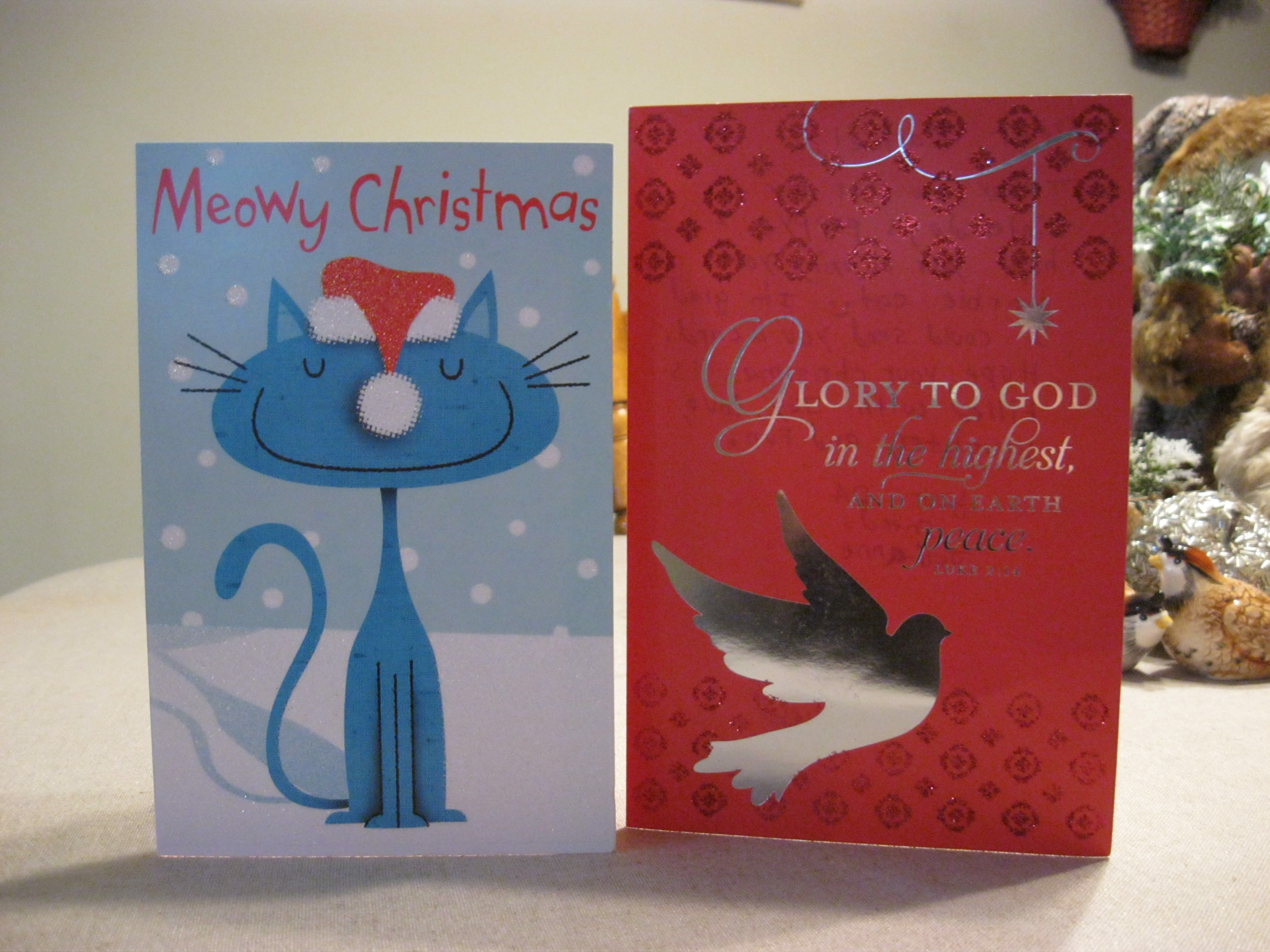 They are two watchers of mine,and although I don't know either of them very well at all it was still fun to exchange cards with them.

On here I exchanged with three people: 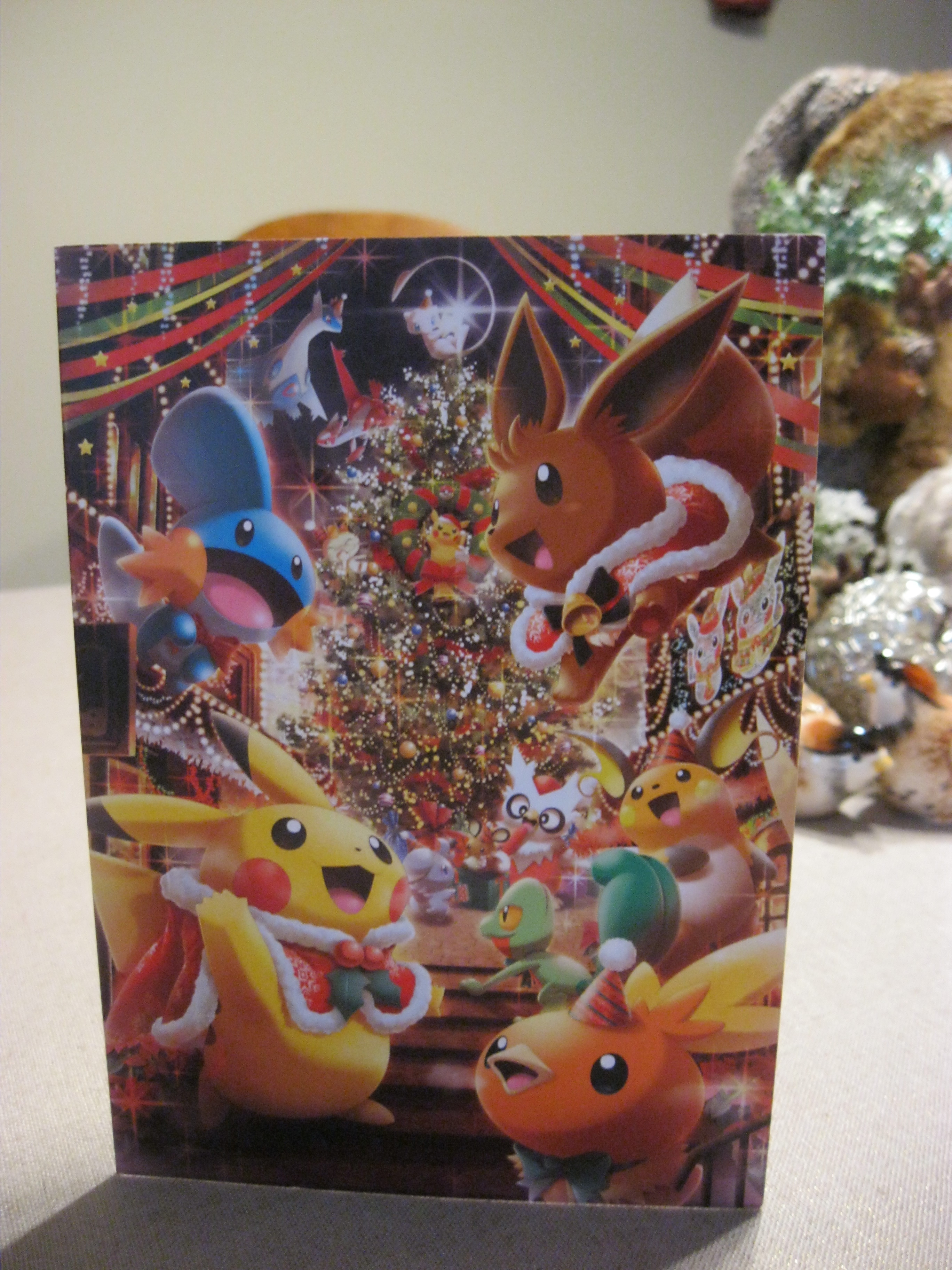 I had actually spent money to buy the other 2015 Pokemon Center holiday card design (the icy scene one with Glaceon) but didn't want to spend the money to get the other one. I'm happy I was able to get it after all! I might frame the two at some point,they are kind of like art prints. 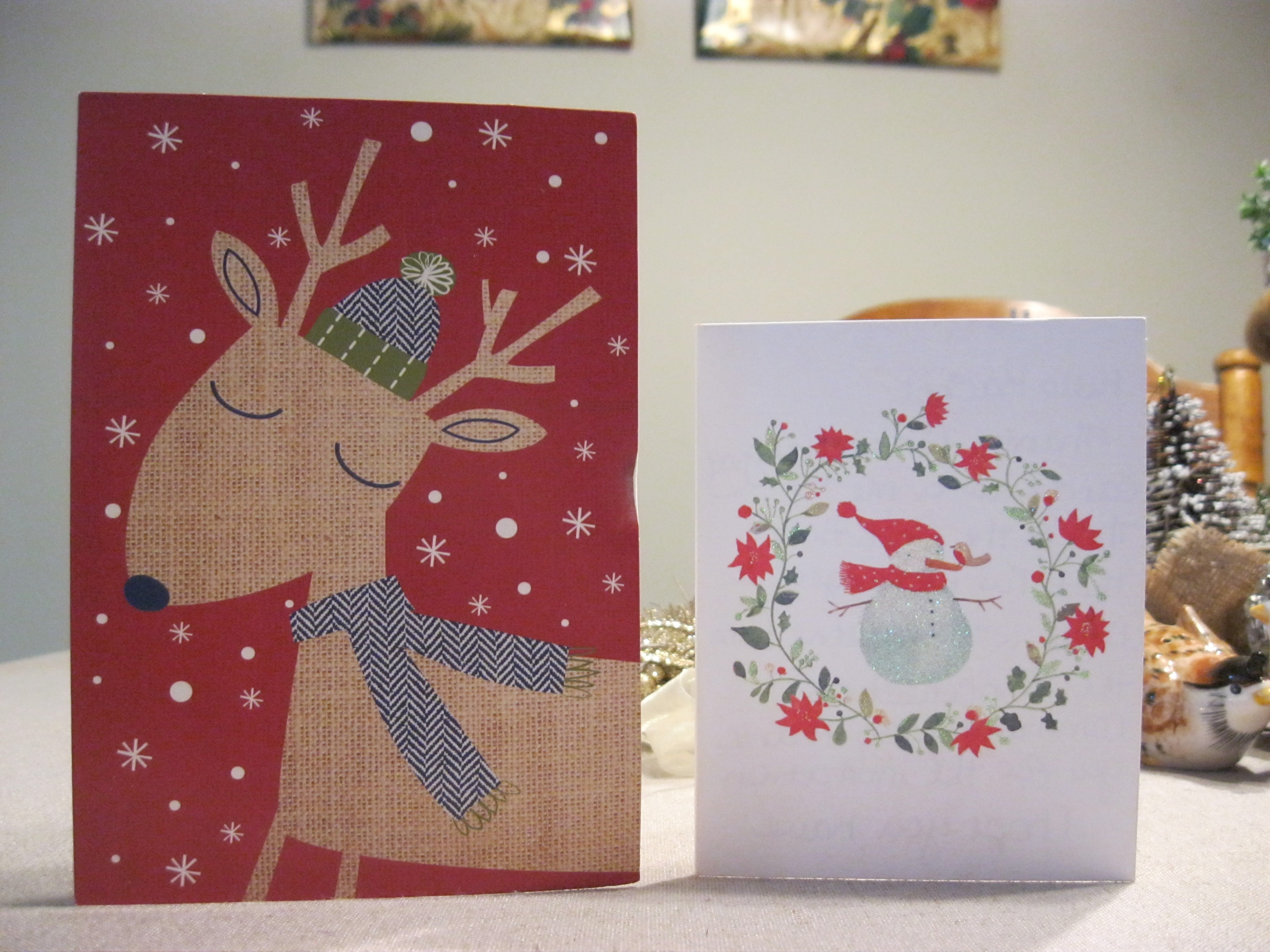 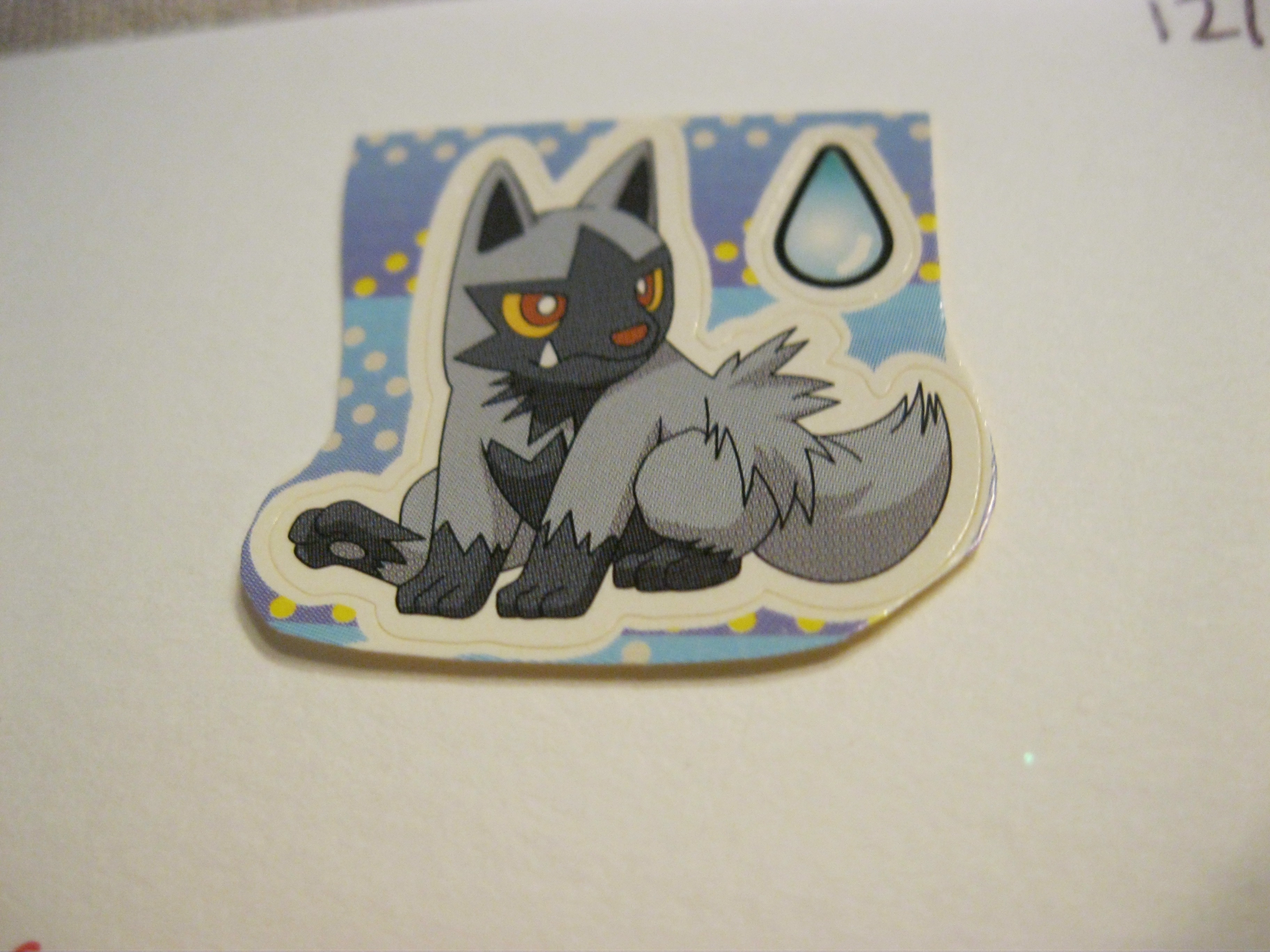 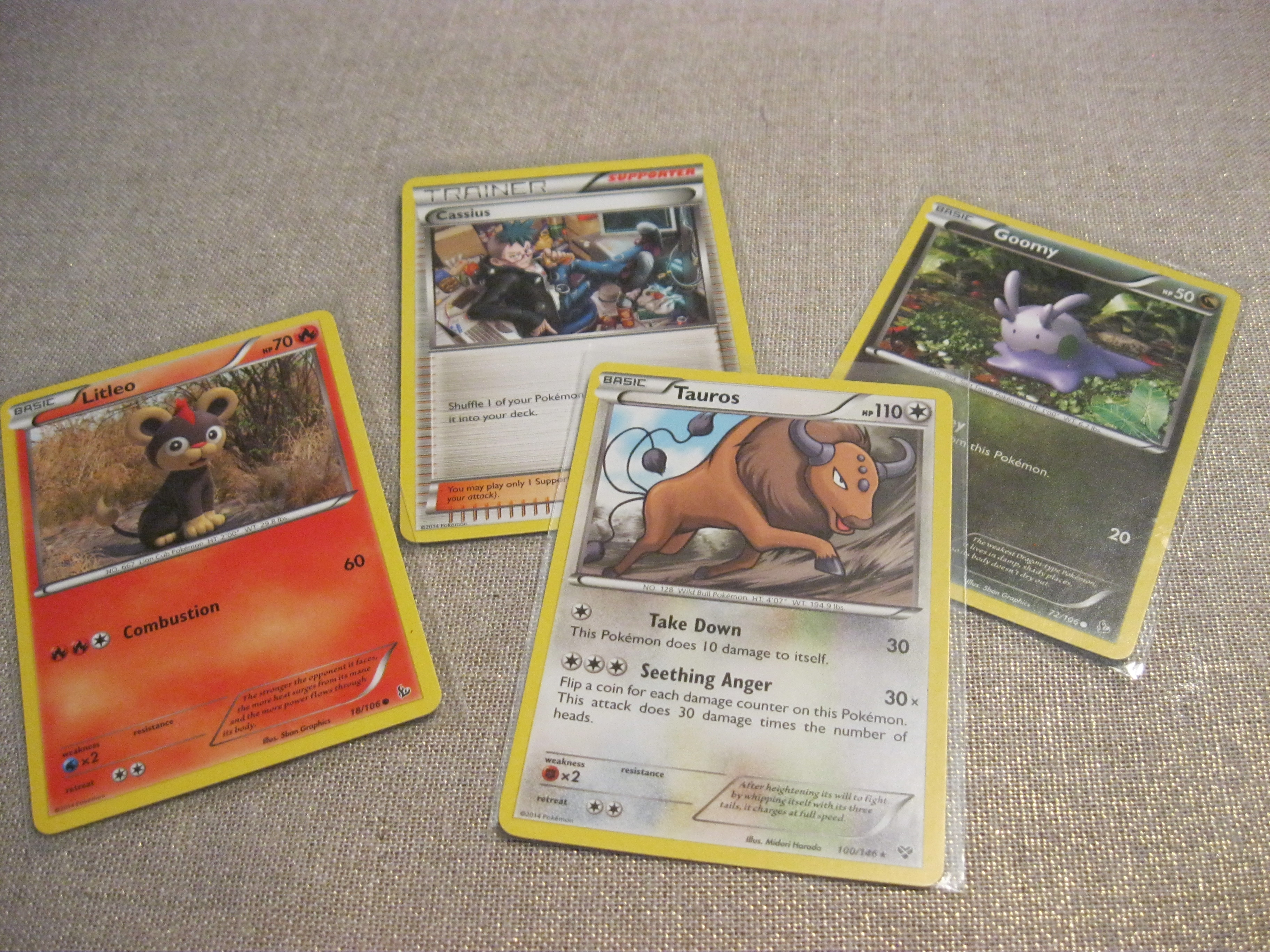 A Poochyena sticker and some of the trading cards that I had on my wish-list.

Overall this has been fun, I hope I can find people to do it with again next year.  Thank you to everyone who participated. <3

I was wondering if anyone would like to exchange Christmas/Holiday cards like i've done in previous years? I know people on my friend's list haven't been around as much but its still something nice to do.
I can't really afford to include any extras this time around,but I can offer some of my duplicate pokemon cards if thats of interest. If you have a favorite pokemon or certain (common-uncommon mostly) card you are seeking,let me know!

Sending cards to the following people so far:

Since no one has voiced any issues with what I post, I will just keep everything on this one account. This is easier for me anyway. I am not quite sure how to do the filters though, how do you make them?

Anyways, I will mail out my Spring Exchange package for

pkmncollectors this week! It is one of the people on my FL this year,oddly enough! I wasn't able to find something of each of the Pokemon they listed out,but hopefully they will like what I picked out. I tried my best. 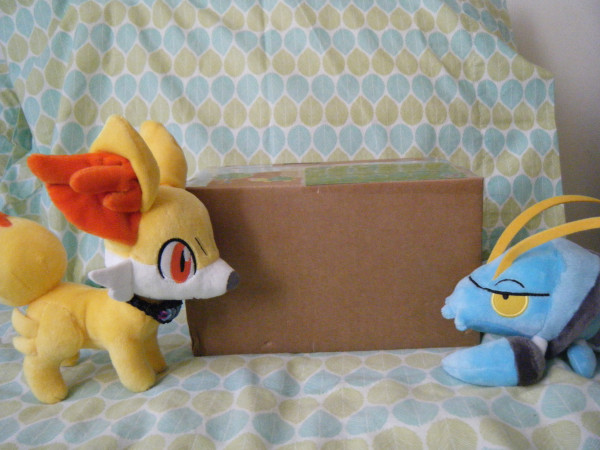 Here is a preview of the card I made (don't want to show full view since that might give away who it is for)! 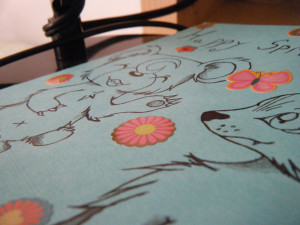 I have actually been done for a little over a week,but I didn't want to mail it out too early. =p

I waited until today to post this just in case anything new came in the mail but it was just junk mail today. ^^;  This time around the corresponence was quite a bit lower than in the previous two years but I did get some nice things from

For the most part I got a thank you from most of the people I sent something to if nothing else but a few I am not sure if they got what was sent or not-hopefully they did!

Unfortunately this time around I missed out on

ktmonkeyj 's annual sign up for her cards on

pkmncollectors .A bit sad about that but my internet was acting up for a few days so I wasn't able to see the post.

I have some stuff for

tamago226 set aside still but I have to get her Japanese address before I send that to her. That's more for new years anyway though. =p

Anyways, on to what I got!

pheonixxfoxx I got her very touching memorial card for her Meyer's parrot Noodle. I actually teared up reading what the inside of it says. ;_;  Those are very cute christmas photos of Noodle btw. <3 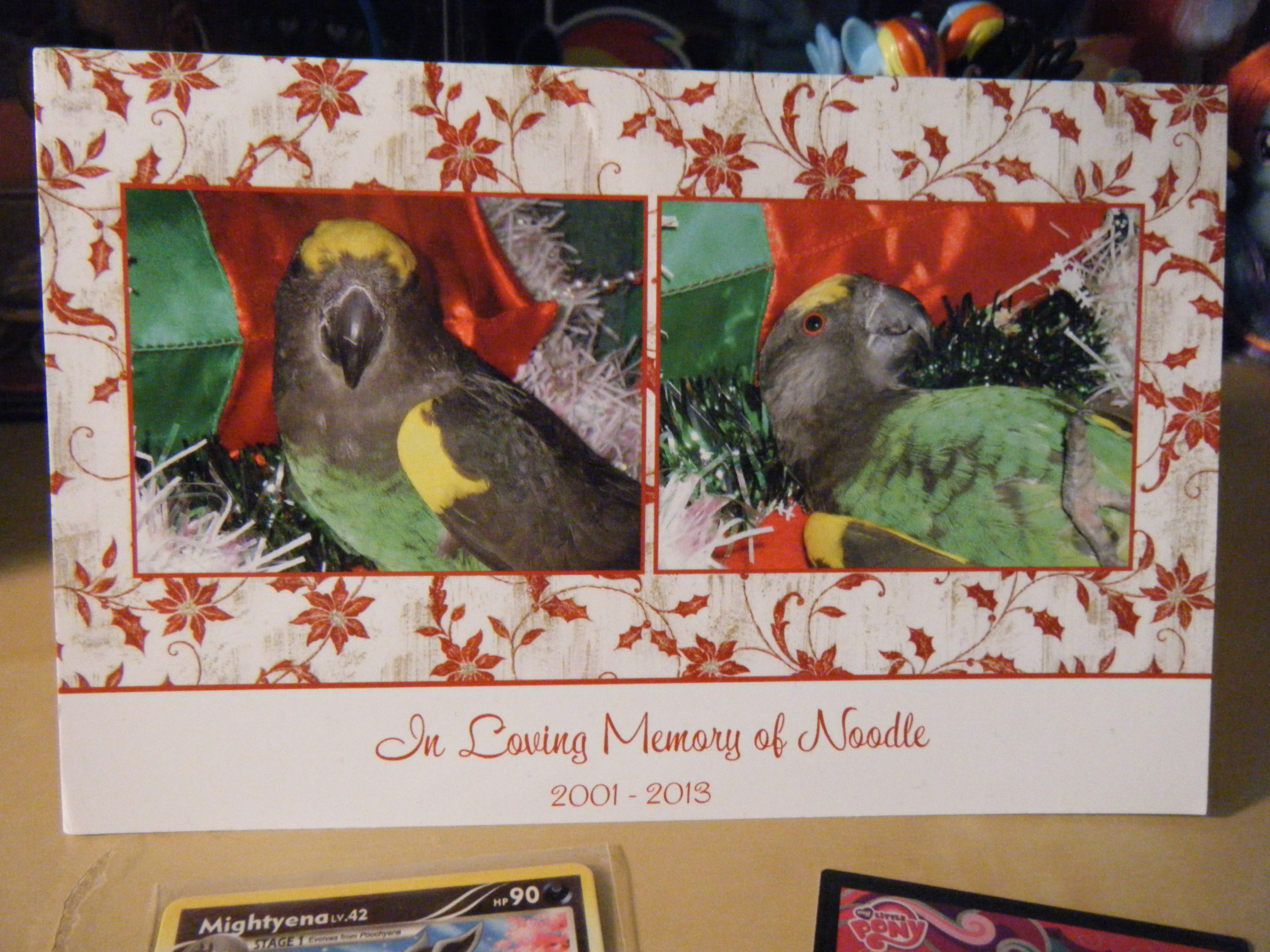 She also gave me some trading cards that I was looking for! (The Mightyena in the sleeve is a bootleg so I am keeping it separately.) 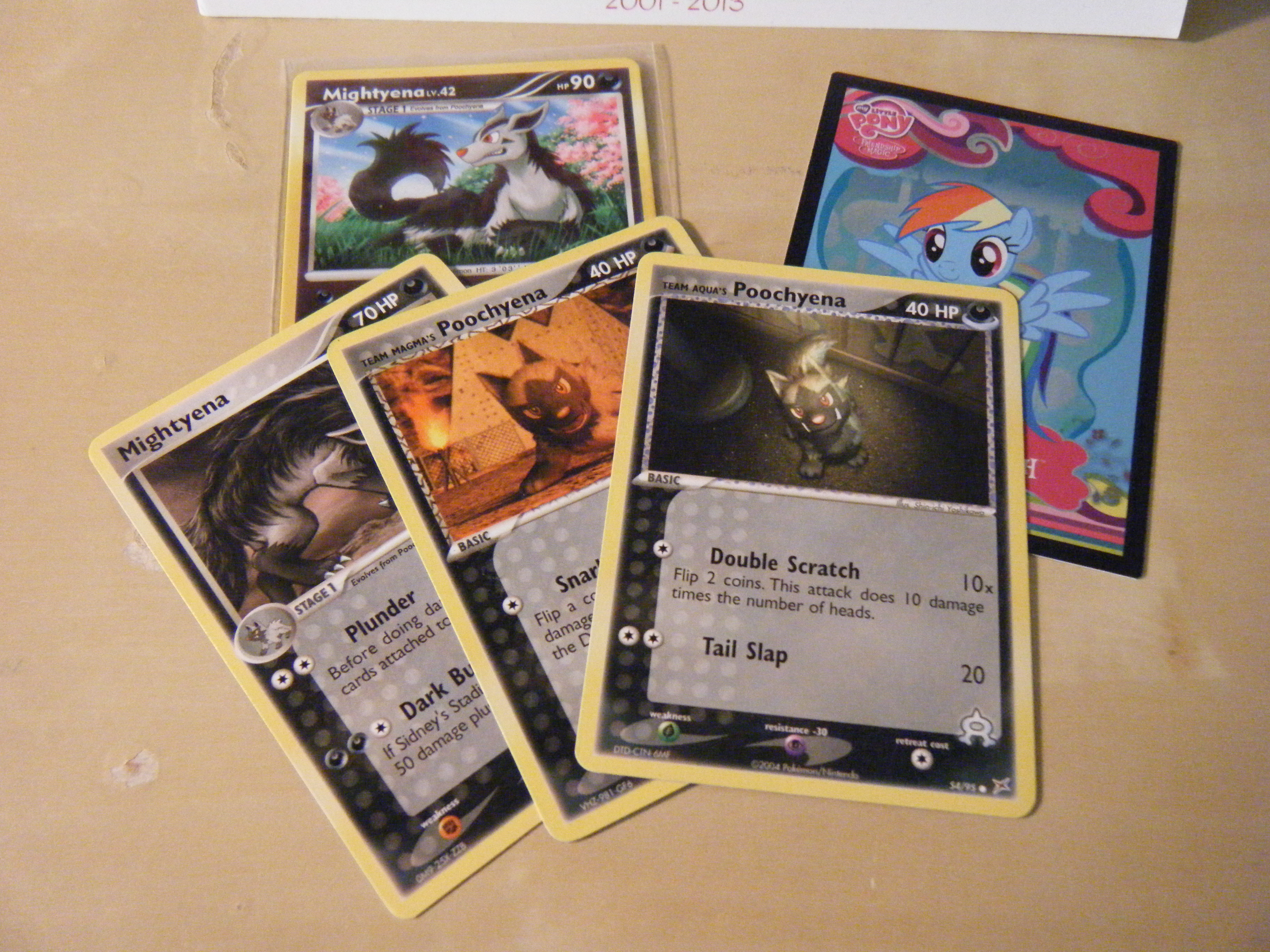 Now I can cross off two of the Poochyena cards from my wish-list.  The official mightyena card is a non-holo version of a card I have, so in that way its not a duplicate! The Rainbow dash was one that I was wanting as well so thank you very much for all of these. ^^

korth I got a treat bag of candy & one of those loom band bracelet things. In colors that I like to boot! I had been curious about these so thank you. I wasn't expecting anything beyond a card from anyone so this was a nice surprise. I also didn't know that candy cane tootsiepops was a thing. o_o 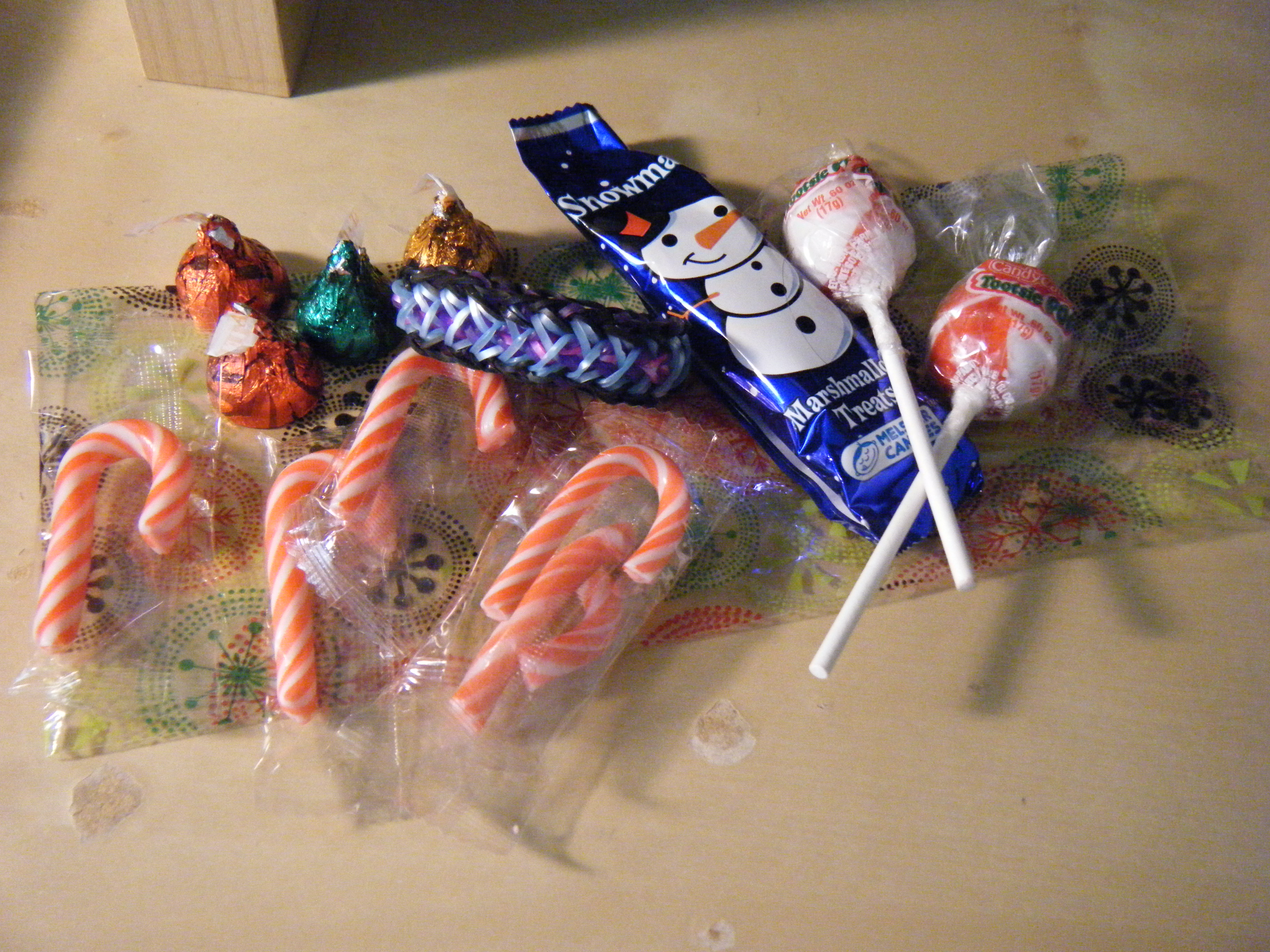 Btw, I put my bracelet on my Pokemon Center Fennekin, Avion: 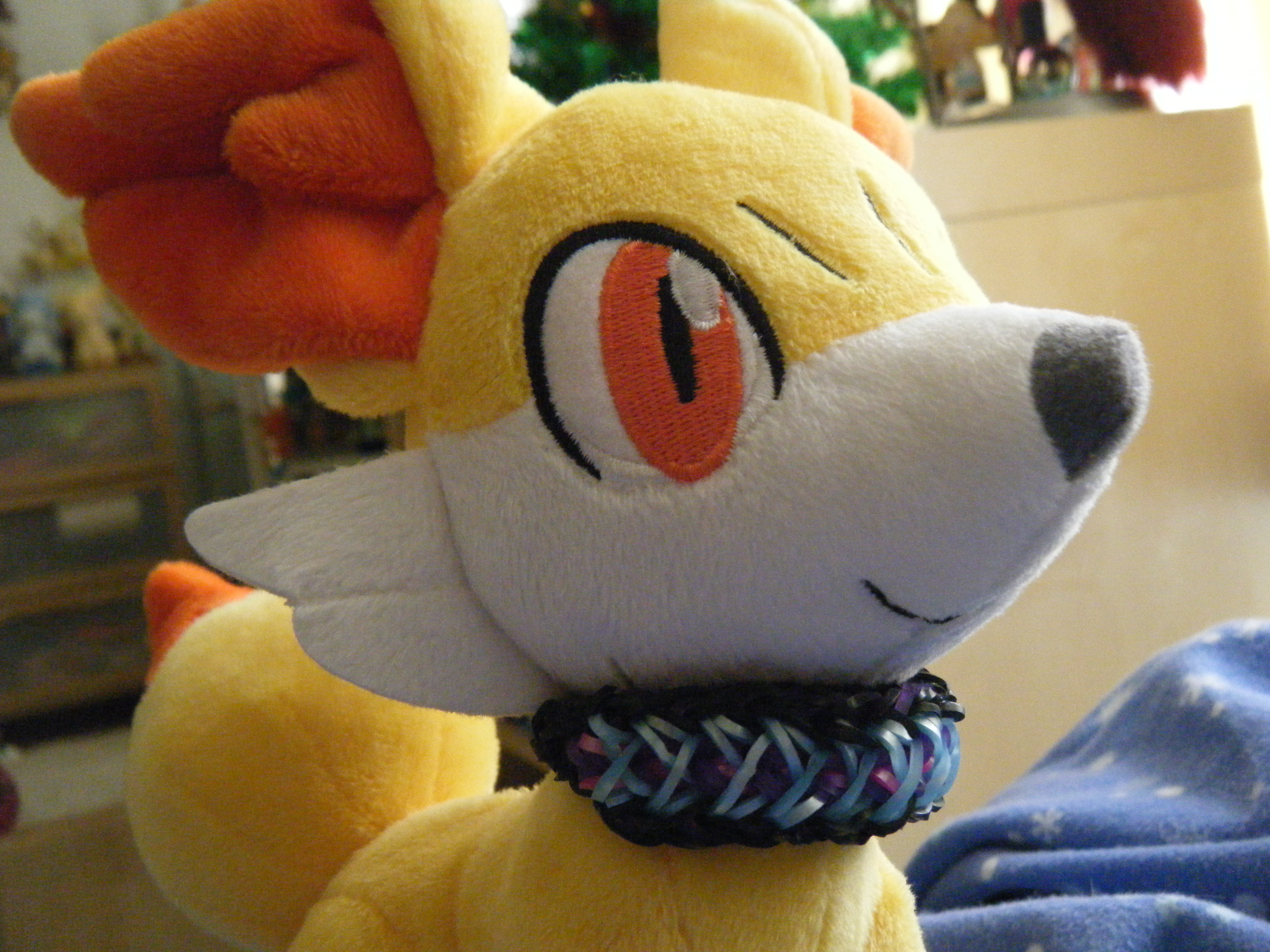 I think it fits him well!

So, for now that's about it but thank you both very much! I really do appreciate this.  ♥

I hope everyone had a good Thanksgiving and first week of December!  We just had a small Thanksgiving at my Aunt and Uncle's house-my cousin who is living with us had to work at Ihop all day,which wasn't very fun for him obviously.  Now my mom and I are starting to decorate for the Holidays but we aren't done yet.

In a bit i'll post some photos of how my room is decorated for the holidays this year, i'm actually doing a bit more than I did last year. I'll be decorating my bathroom too but I have to clean it first.

Anyways,on to the main reason that I made this post: I have shipped the majority of the cards/packages out now! They should arrive by the end of the week (hopefully). I tried to give everyone atleast a little something extra, I hope you all like what I gave.

On hold until I get addresses:


Now if you aren't on the list,its not too late to sign up! Just let me know by comment or PM if you are interested in doing this or not.  <3

What are your favorite Pokemon? Are you looking for any Pokemon Cards in particular? Poochyena and Mightyena of course! I also like the majority of canine pokemon (especially eeveeloutions) , feline pokemon,swadloon, the Oshawott line (samurott is my fav,followed by oshawott), xerneas,deerling line,unown,goomy line,honchkrow,talonflame, etc.

Foreign language and/or reverse holo cards of Poochyena/Mightyena would be awesome! Duplicates are okay in the case of those two since they are my absolute favorite. ^^ (In english or otherwise)

In general, english cards from Ruby/Sapphire onward are fine as long as I don't have them. I would like all cards from both the Japanese and english versions of the "Shiny Collection" set.

Do you like My Little Pony: Friendship is Magic? If so, what are your favorite characters? Are you looking for any merch in particular? Yeah, I do! My favorite chars are Rainbow Dash, Luna/Nightmare Moon and DJ-Pon (Vinyl Scratch). I also kind of like Queen Chrystialis.   The only one I actually collect is Rainbow Dash though.

What are your favorite types of animals? Wolves are my top favorite. But I also like foxes,deer,birds (especially parrots,owls and crows/ravens), wild cats and mustelids ( like otters,ferrets,weasels).

In addition to that I have a soft spot for almost all arctic/tundra animals.  I adore Serrows & Nudibranches (sea slugs)!

Do you have any Christmas items that you like in particular? I'm really not too picky but I always like plushies(unless its musical) and oranments. Candy is fun too!  I tend to get stuff with reindeer and penguins on them.  Of course,Xmas Pokemon merch is adorable!

What kinds of candy do you like? Gummy/Jelly candies, fruit or mint flavored hard candy, milk chocolate, twizzlers, etc. I don't like things with nuts in them, or Cinnamon flavored candy. I love grape flavored things!  I like chocoloate oranges alot too.

Now i'll post my wish-lists, i'm not really expecting anything but it doesn't hurt to post I guess. =p
( Collapse )

If anyone would like to draw something of my fursona character Kura, you can view her references here:
http://www.furaffinity.net/view/3253466/
http://poke-arts.livejournal.com/377611.html?thread=2888459

If anyone would like to give me one of the Vivillons that I am still looking for in Pokemon X, that would be awesome too!
http://shadoweon.livejournal.com/55869.html

I know its a bit early, but I'm kind of in the spirits now. For the past two years, I've done a small card/gift exchange here on LJ. I would like to continue the tradition again this year!  =D

This year, I can't buy too much for people but I have quite a few things that I can still give away such as: MLP stuff, Pokemon cards + a few other Pokemon items, animal figures and plushies! (In addition to small Christmas items like candy and ornaments.)

To give me an idea of what to give everyone please fill out this little questionnaire when signing up:

Feel free to mention something else if you would like,you can share wish-lists too- I just can't promise I will be able to get things off of them.

If you just want a plain card with nothing else,that's fine too! Just let me know.  If you don't like Pokemon or MLP, just don't answer those questions.

Lastly: If you would like me to draw anything for you, such as OC's/fursonas - link refs please! I will need everyones' addresses again as well!

Here is my wish-list:
http://shadoweon.livejournal.com/57449.html

You have plenty of time to sign up, so no rush for those interested. It's okay if you can't send your card until after Christmas for some reason. ♥

I thought i'd share photos of the xmas cards I received up until now since Christmas is coming up pretty soon!

Nothing super interesting has been going on these past ten days, but the visit to my Dad's side went alright. It wasn't quite as bad as I expected,but it wasn't anything wonderful either-it was just okay. The worst part is my Aunt Christine made us all wait an hour before we could do anything that was planned so that she could go to her Grandson's house and "make him smile for Christmas photos". Its like dude, who cares. XD

A couple days ago, my I <3 Eeevee package came! I'm really happy to have them finally, and the collar I had bought for the big eevee in advance fits her perfectly: 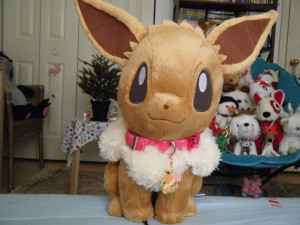 (Sorry the pic is a bit blurry). I put my Pokebox Eevee charm on the hoop part. c:

I still have to mail out one last Christmas card then i'm done with all that stuff, but  I got

korth's already. Thank you so much guys,I loved both of them. Korth-Thank you for drawing Kura accurately too! (Not everyone is so good with this. X3)

Well, I guess that's about it for now, but i'd like to say welcome to my new LJ friends from

pkmncollectors! =D Oh, and on a final note, I'd like to offer my condolences for the victims from the Connecticut shooting on Friday,its truly sad and couldn't have come at a worst time of the year...

I mailed out packages for the following:

I mailed out cards for the following:

I still need to mail: