I brought my Clauncher figure along to take a few pictures while I was there. I brought one of my Samurott ones as well but those pictures didn't work out as well. I would have brought one of my animal figures (like my Schleich Seal or Seagull) but they can scuff alot more easily and I was worried about them getting marks from being carried in my bag. 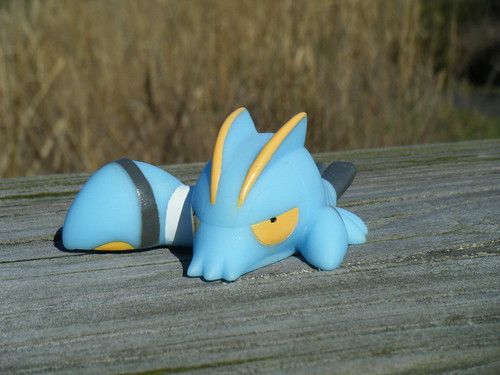 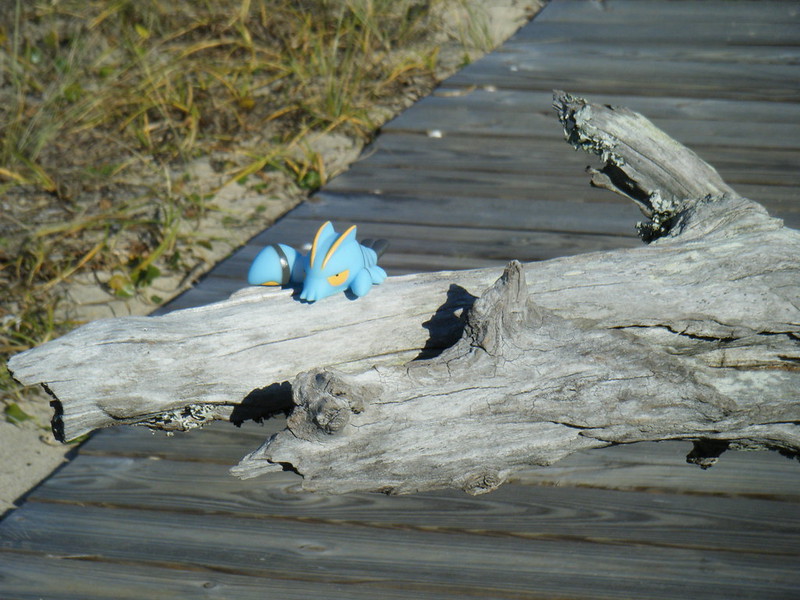 After we left the reserve we went to a local resturant along the drive to the Aquarium. I saw some beach houses  on the way out of the reserve which was kinda neat too! I've never seen that sort of thing in person before. The resturant was just kind of a typical bar/resturant type place but it was alright. I didn't like my food very much but my friend liked his atleast.

The Aquarium closed at 5 and we arrived at 3 so we didn't have a huge amount of time to look at everything but did fit everything in. The bird exhibit they used to have is closed until further notice because of damage to the enclosure so that was kind of dissapointing. Everything else was fine though,got to to see their River Otters again.

I didn't take any pictures there since my camera isn't very good with low light.  We left after they closed and ended up getting stuck in traffic twice on the drive home. So that part kind of sucked.  Got to eat at a Noodles and Company somewhere in Hanover County for dinner though. ^^

Overall it was a fun day,i'm glad I went!

I ended up getting back home quite late last night (almost 11pm) so I didn't turn my computer back on before going to bed. I'm waking up now so figured now would be the time to post about how everything went.
Got up at 6am and left around 7:30-8am and then it was just a lot of being in the car,lol.Made pretty good time though because it only took 3 hours instead of the 4-5 it could take to get there. Instead of going to the commercial part of the beach (which has a parking fee) I suggested going to this Wildlife Refuge that I read about the day before. This place (Back Bay Wildlife Refuge) is apparently a part of the Outer Banks! Just a very tiny part of it, I have always wanted to see the Outer Banks so it was nice to see an idea of what it's like.

Part of it is marshland and part of it is a regular beach,i've never seen sand dunes and sea grasses before in person. :3 However they were pretty strict about not being anywhere near the sand dunes for wildlife conservation reasons.
In the marshland part there's Water Mocossains (Cottonmouths) there rather often I guess because we saw two of them.  My friend/roomate saw the one a little closer than would be preferabble since we didn't even notice him at first until this older woman who was sort of like a unofficial tour guide pointed it out,haha. It was just a juvenile one though,it opened its mouth a bit but it closed it again after  backing away so no worries there. I got a picture of him (from a bit farther away): 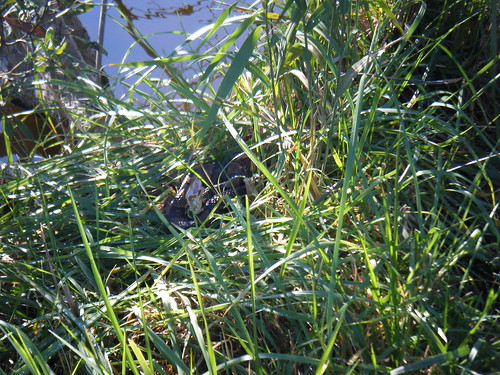 Also saw Tundra Swans out in the distance on the bay side's water,you could hear them more than you could see them but that was still neat . Apparently this place is an important migration stop for them. Saw a few other birds as well but no one super up close. 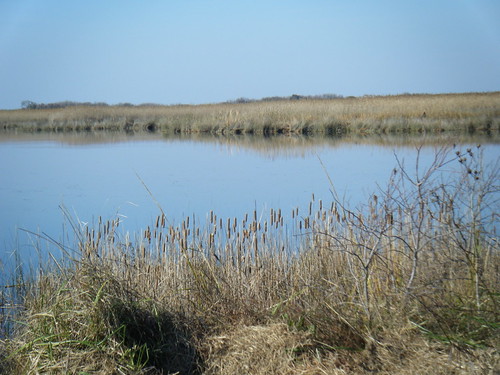 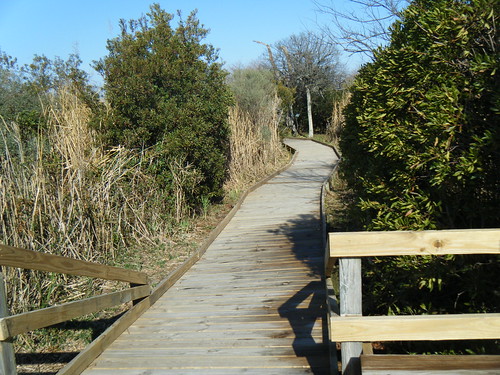 On the beach there were some interesting shells so I took a few that washed up. They aren't in the best shape but i'll keep them for a little while anyway. I also found a peice of real seaglass! Just one peice unfortunately,but it is cool.
A little farther up I found a Ghost Crab claw as well. I feel bad for the crab but that is interesting to find. I'm not sure if I need to clean it out or not though? It doesn't stink so maybe the fleshy parts inside it already decomposed. 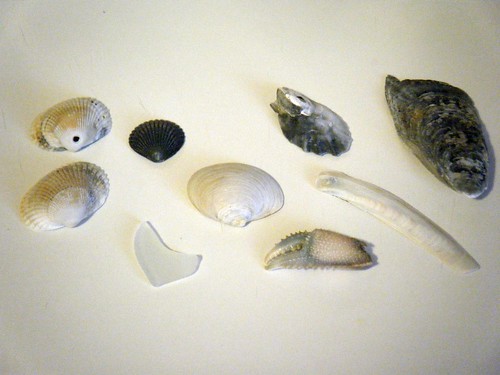 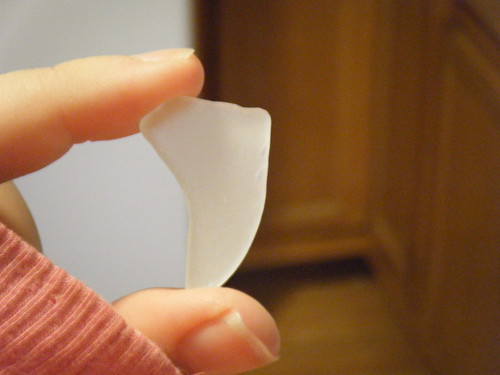 Here are some other photos I took: 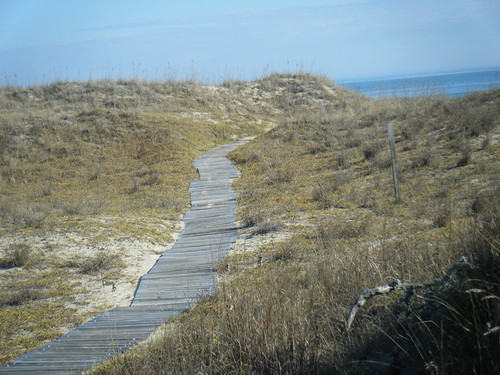 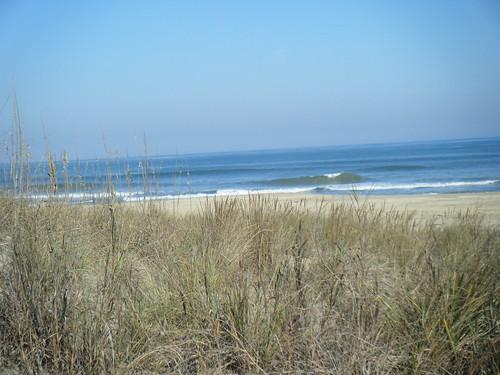 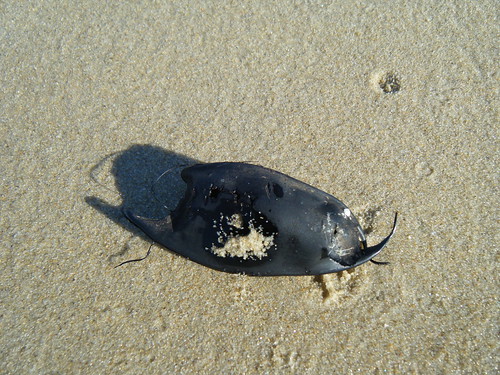 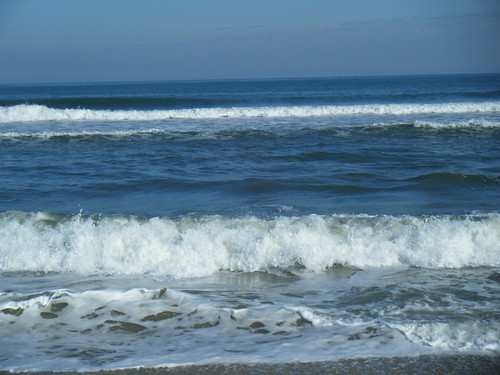 (The little black thing is a "Mermaid Purse" which is nickname for egg cases left by certain sharks and rays,i'm not sure which one this would be from. Either way I have never seen one of these in person before!)
Collapse